‘The Essay of Theseus’: The Ethical Limitations of Editing

The ship of Theseus, dating back to the days of Heraclites, Socrates and Plato, is a thought experiment that goes something as follows: if a ship were to gradually decay, and were to thus require that each part of the ship- its base, its oars, its sails- be replaced, is the ship the same as the original? And if not, at what point does the restored ship become a new ship entirely?

Though the paradox has stimulated fervent debate and little resolution in both the ancient and modern philosophy realm, the question bears practical significance to the greater humanities discipline, particularly to the art of writing; at what point do attempts to ‘edit’ or ‘critique’ another writer’s essay make the essay the editor’s, and not the writer’s? What are our ethical limitations when it comes to editing? 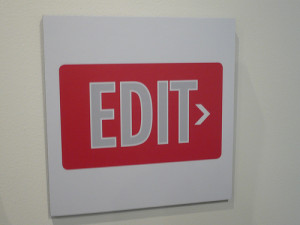 This question became relevant when I heard a fellow writing tutor read her tutee’s essay and proclaim: “I think what you’re trying to say here is….”

But on the other hand, it is possible that the writer was actually trying to say something different, something more deviant from what the editor had in mind. And perhaps the editor was too consumed by her own interpretation to understand the author’s point.

On one hand, it’s difficult to blame the editor.  Beyond inserting commas and polishing grammar, we tutors and editors are instructed to improve the content of the writer’s piece, by ensuring the writer’s thesis is effectively focused and strewn throughout his/her work.

But even the use of the word “improve” may be problematic, for it begs the question of what golden standard of writing we are “improving” towards. The history of American literature does not help with this debacle; after all, what would the tight-prose spewing Ernest Hemingway say to “improve” the work his more experimental counterpart, Virginia Woolf? How would the ‘tactile brilliance’ of Harper Lee attempt to “improve” the spontaneous and empathetic prose of J.D Salinger?

The diversity of such authors’ voices is what makes English literature such a fascinating discipline; we realize just how refreshingly profound a simple story can be when the narrator applies his or her own voice, perspective and tone to it. Indeed, isn’t that the purpose of writing: to bring new, original insight upon an issue, deliberately crafted by the writer’s selection of pacing and spacing, or of punctuation and hyphenation? While we readers, and editors-at-heart, may feel obliged to “fix” these seemingly objective guidelines,  we should remember, at least for creative or opinions-based writing, that these “rules” stand as mere “preferences”, if they are used (or misused) to emphasize an author’s purpose.

While I have the utmost respect for the art of editing and the institutions that practice it, perhaps we editors should more carefully think about the way we edit, so as to not undermine the writer’s honesty; perhaps rather than assert what the writer is trying to say, perhaps we should ask, “What are you trying to say?”

Otherwise, as was the case for Theseus’ ship, we risk transforming the essay from that of the writer to that of the editor.

Julia Hotz is a graduate of Union College with a degree in Philosophy/Political Science. She is interested in law and public policy, and would love to one day work on education policy issues in Washington, DC.