The Place of the Smartphone at the Desk and Dinner Table

For thousands of years, the standard dinner table has featured the following four items: fork, knife, plate, spoon. Similarly, likely dating back to the days of Plato’s Academy, there have typically sat three items on the standard classroom desk: a writing utensil, a notebook, and the assigned readings.

Yet at some point in recent years, a new fixture has entered these domains; deemed an essential tool in human’s dining and learning experiences, it has moved out of its original home in the purse and the backpack and found its way onto dinner tables and desks nationwide: the smartphone. 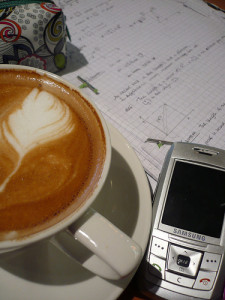 Indeed, so pervasive is the smartphone’s presence in these historically-sacred domains that professors find themselves indicating when it is not appropriate to use the smartphone during class (as to imply that there are times when it is appropriate). Restaurants are similarly smartphone-savvy, creating menu-apps and posting WiFi codes on their menus.

In many respects, the presence of this device has posited benefits for the average student and diner: Interested in reading the bio of the person your professor is talking about? WikiPedia it. Want to savor the image of your dinner’s elegant presentation? Instagram it. These platforms, coupled with Google, Facebook, Twitter, and other socially-interactive websites and applications, suggest the smartphone’s unprecedented ability to both stimulate conversation (based on its display of what’s trending) and enrich classroom dialogue (based on its role as an interactive encyclopedia).

On the other hand, the Smartphone may be doing just the opposite; simply by making this device a permanent fixture of our classroom desks and dinner tables, we may become overly-reliant on its abilities. When asked a difficult question in class, we may turn to Google before figuring the answer out for ourselves. When confronted with an awkward silence at dinner, we may use our phones to qualm the anxiety. By remaining constantly ‘connected’, we may diminish our ability to think critically and independently. By engaging in a platform that sends and receives “snap” pictures of our surroundings, we may be depriving ourselves of fully experiencing the moment we capture in the present.

This phenomenon is precisely what recently viral sensations have begun to address. Look Up, for instance, describes itself as “a spoken word film for an online generation”; it addresses how our addiction to technology and social media diminishes our experience as humans, and implores that we “look up” from our smartphones. Digital Detox similarly pleads to “develop a new code of ethics around technologies, creating social etiquette, setting positive cultural norms, and raising awareness around harmful habits.” Responding to the fact that “the average American spends more than half of their waking life staring at a screen”, the movement sponsors “Digital Detox Retreats” and summer camps for the purpose of “disconnect[ing] to reconnect.”

Regardless of how centrally you feature the smartphone in your individualized dining and learning experiences, it is important to contemplate how smartphone’s increasing prevalence at the dinner table and in the classroom affects our restaurant and classroom culture; is it a beneficial addition- allowing us to process more information and enrich conversation? Or does it undermine our beautifully human ability to think critically and live in the moment?

Julia Hotz is a graduate of Union College with a degree in Philosophy/Political Science. She is interested in law and public policy, and would love to one day work on education policy issues in Washington, DC.